Skip to content
Abhijeet D Python, VMware 2020/04/ 4 Minutes
Here we are with yet another literal type called as strings.

Strings are used in all modern programming languages to store and process textual information. Logically, a string is a sequence of characters.

What is a Character?

A character is a unit of information as per computer science. Characters consist of graphical shapes, called as Graphemes. Graphemes is the fundamental unit of written or printed language. Graphemes consist of lines, curves and crossings in certain angles or positions and so on.

Unicode is a standard designed to represent any character from any language. Unicode can handle any text from any of the world’s writing systems unlike ASCII.
ASCII can handle languages like English or German but not the likes of Japanese or Korean. ASCII is restricted to 128 characters and Extended ASCII is limited to 256 bytes or characters.

All strings in Python 3 are sequences of pure Unicode characters, no specific encoding. Unicode has encoding like UTF-8, UTF,16, UTF-32.

There are different ways to define strings in Python:

We can use single quotes (”’) or double quotes (“””) to represent strings.

extends over multiple lines, Also,
It can contain ‘single’ and “double” quotes inside it.”’
Strings are immutable in Python but strings can be indexed. So whenever we pass on string, index value is associated in both directions with each characters as shown in example below. This is similar concept to that in C programming language.

Hence, slicing operator [] can be used with strings to access characters at specific index value as explained below.
Example:

print(“He said, \”What’s there?\””)
List of all the escape sequence supported by Python: 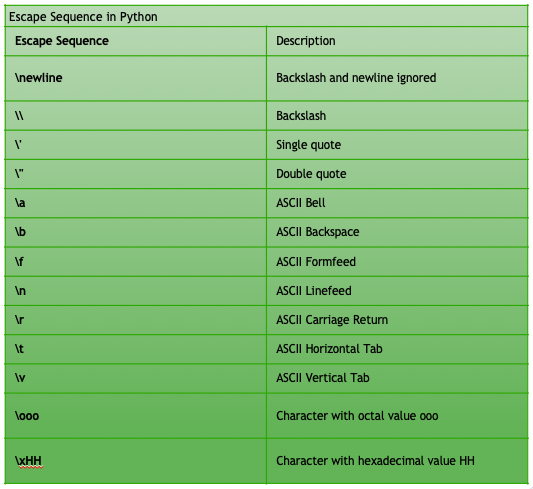 The format() Method for Formatting Strings

a = “This will split all words into a list”.split()

When you learn, know it / When you know, Share it:

I am a virtualization and cloud Consultant. Also a VCI and MCT. I am in IT industry since last 13 years and worked across various technologies. vExpert since 2016-present View all posts by Abhijeet D

This site uses Akismet to reduce spam. Learn how your comment data is processed.

Knowledge is meant to be shared. #VMware